In March Carers Tasmania issued a media release detailing the impact that the Coronavirus pandemic was beginning to have on the state’s unpaid carers.

In an early April edition of the Examiner, Adam Holmes reported on some of the issues that carers were facing. These included the closure of local support services, as well as many carers seeing a reduction in their employment.

Since this time, the Coronavirus has seen its peak in Tasmania, and the state has gone more than 50 days without a new case of the virus.

“While many are looking forward to returning to business as usual, many carers are still feeling the ripple effect of COVID-19,” said David Brennan, Chief Executive of Carers Tasmania.

Carers Tasmania, the state’s peak body for family carers, surveyed 400 carers to identify what the impact of COVID-19 had been on them and their caring roles. 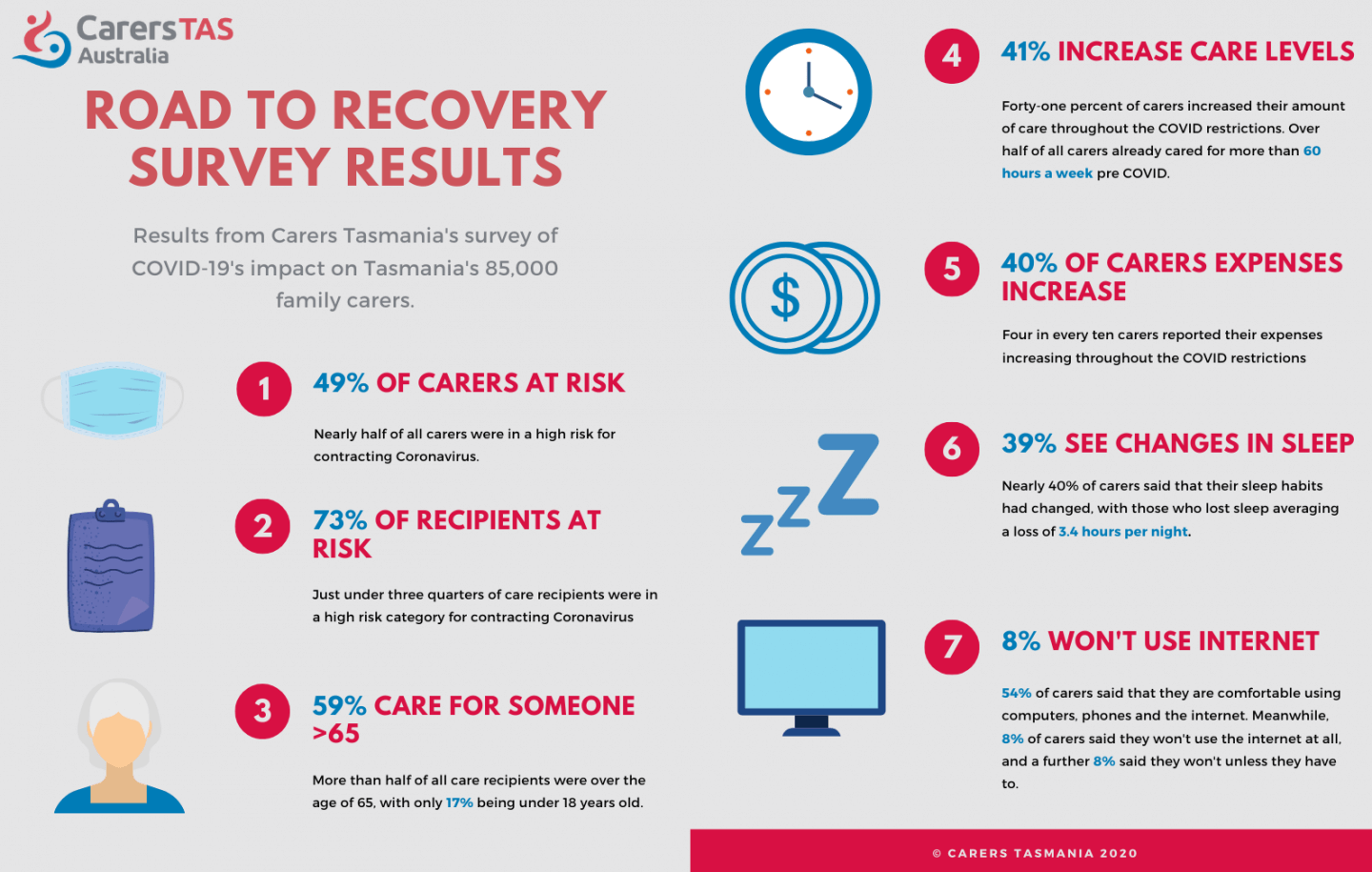 The Road to Recovery survey’s results highlighted a range of different experiences amongst carers in Tasmania. While some carers felt little to no change as a result of COVID restrictions, others were overwhelmed with stress, anxiety, and burdens throughout the height of restrictions.

“I have been working from home, caring for my two autistic sons, and taking video conferences every day…Some days are fine, but I am feeling a big strain.”

Carers were not only impacted by their care recipients’ risk of exposure to the disease, but just under half of carers reported being in a high-risk category should they be exposed to the virus. This was worrying as half of all carers went on to say that they didn’t have contingency plans should they become ill, and just over 40% of carers reported having family that can assist upon short notice.

As we already knew, carers live and breathe their caring role.

More than half of all carers reported caring for more than 60 hours a week pre-pandemic. 40% of carers said that this time increased following the introduction of COVID-19 restrictions. Likewise, 40% of carers reported increased expenses since the outbreak, citing that expenses including food, bills, and fuel for transport had risen during isolation.

Carers reported changes to their sleeping habits, while also expressing concern for their mental and physical health. Thirty-nine percent of carers reported changes in their sleeping habits, and those who said they lost sleep reported an average loss of 3.4 hours per night. Likewise, 16% of carers said they were exhausted and overwhelmed thinking about their wellbeing, with a further 13% saying they were concerned and worried daily.

When asked if they had used technology to connect with family and friends, almost 90% of online respondents said that they had, while under 60% of hard copy respondents said they had. When asked why this was the case, 17% of all surveys returned by mail indicating that the carer will not use the internet at all, while 12% said they just do not want to use technology.

When asked what would help them following the lifting of COVID-19 restrictions, carers provided valuable feedback.

Nearly half of all carers indicated that there were some areas where they would like more skills or knowledge. When asked what would help them, the most common answers including ‘Being connected to my local community’, ‘Having a better understanding of the services I can access’, and ‘Be connected to other carers.’

The findings of this survey highlight the differing experiences of carers throughout the 2020 COVID-19 pandemic, with some carers routines seemingly not changing, while others struggled to keep afloat.

The results provide insight into steps to move forward beyond restrictions, and to the supports needed by carers in Tasmania.