The Advocate published an article on October 16 2020 – 6:00PM reported by Libby Bingham.

The selfless work of unpaid carers across the nation amounts to a staggering $77.9 billion, according to a new report.

The report commissioned by Carers Australia into what it would cost to replace Australia’s unpaid carers with wage workers showed the amount had increased by 29 percent since 2015.

“We know that unpaid carers in Australia go above and beyond to care for family members and friends in need, but to see such a huge dollar figure put on these caring roles really helps to bring their vital contribution to the community into perspective.”

Ulverstone’s Tammy Sherriff has been an unpaid carer to family members for years and says the labour of love can take a heavy toll over time.
The single mother of four said it was a challenging time caring for daughter Ameera who was diagnosed with chronic anorexia nervosa seven years ago.

First she reduced her hours and then had to give up her paid work.

“I had no support apart from our wonderful GP, Jane Cooper,” she said.

“I had to learn about refeeding when the malnourishment nearly took her twice,” Miss Sherriff said. 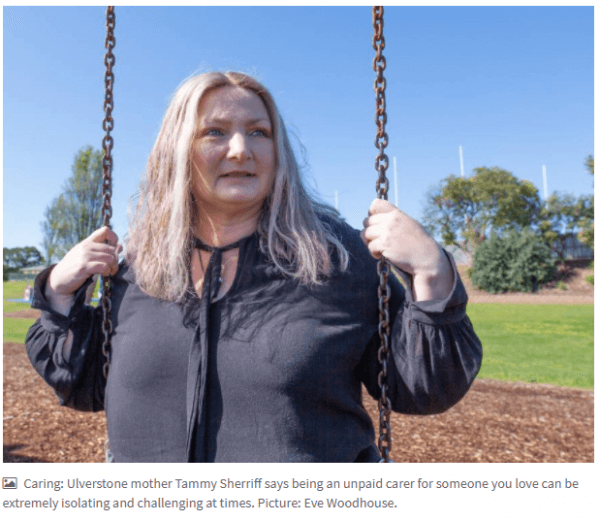 She also cared for family members with anxiety and depression, renal failure, and autism.

After connecting with Carers Tasmania things started to improve for her as an unpaid carer.

“They were amazing; they helped me and supported me,” she said.

“I honestly don’t know where we would be without Caring Tasmania and Dr Cooper.

“They put me in touch with other carers, and talking to people going through the same thing is a relief.

“They understood when I said I couldn’t do it anymore, but I still did it.”

She said as a carer it can be isolating and “you don’t have friends and you don’t talk to people because you’re so drained and emotional”.

“I hear from other carers about the lack of support. Especially the older carers who feel unsupported and neglected.”

Miss Sherriff said she was at the point where the most challenging part of her own caring journey was over.

She now works as a carer support officer who understands first-hand the struggles of the people she helps.

“There needs to be more services and activities for carers to get together in remote areas,” she said.

“The services we have are mainly in the cities, and a lot of carers can’t afford to travel or find it impossible to get away because of the high needs of the person they look after.”

When she was a carer, the financial impact meant as a single mother, her children missed out on going places and could not play a sport or do dance classes because of the cost.

“When I worked in aged care, I got to leave at the end of the day and take home my pay,” she said.

“When you care for a family member or close friend, you don’t get to leave, and the government provides just enough to get by, but if you want to go away, or need to arrange respite, you can’t afford it.”

Miss Sherriff said after being a carer for most of her life, she is working in the job she loves.

“Now, I get to give the same support I received to someone else,” she said.

“I know what it’s like to be in their situation and when a carer calls in and they are overwhelmed, I get it, I get the desperation.”

Miss Sherriff said it was common for unpaid carers not to give themselves credit or recognise what they do.

“People do it out of love,” she said.

She was speaking to raise awareness of Tasmania’s 84,000 unpaid carers during National Carers Week, from October 11 to 17,