One in six Tasmanians are unpaid carers whose sacrifices were instrumental in flattening the state’s coronavirus curve, explains David Brennan.

THE coronavirus pandemic has up-ended every aspect of our lives, no matter our age or circumstances. Whether at school, university, work, or retired, normal was uprooted and replaced with uncertainty, isolation and despair.

In National Carers Week, it is timely to celebrate the contribution of Tasmania’s 85,000 and Australia’s 2.7 million unpaid carers.

It is an opportunity to raise awareness among all Australians about the diversity of carers and their caring roles.

An unpaid carer is someone who provides care to a person with disability, chronic, terminal, or mental illness, who is frail aged or has an alcohol or other drug issue.

In 94 per cent of cases, carers are family members.

Unpaid carers have been instrumental in flattening the COVID curve.

Many of Tasmania’s 85,000-plus carers locked down their own homes to protect the loved ones they care for. The 2020 Carers Tasmania Road to Recovery: COVID-19 Survey of 400 carers revealed the extent of how carers helped to flatten the curve. The results reported that a number of these carers will continue in lockdown or restrict social contact until there is a vaccine.

The survey found 73 per cent of carers care for someone in a high-risk category (chronic condition or compromised immune systems), with just under half of carers in a similar category themselves. More than half of carers stated they don’t have other family to help and less than half have a contingency plan in place.

With significant restrictions and physical distancing requirements, more than half of all carers reported increasing care and responsibility across the board with some caring more than 60 hours per week, and an average increase of 24 hours per week.

Unpaid carers had to step up with medication management, practical assistance, financial management, emotional support and replacing support when services were not available.

The psychosocial impact on family carers was significant. Most reported lost or disrupted sleep, loss of time with family and social networks, increased stress, lower wellbeing, loss of income and increased costs of living. Yet, without unpaid family carers stepping up and protecting vulnerable family members, the cases of COVID — and indeed deaths — may have been higher. 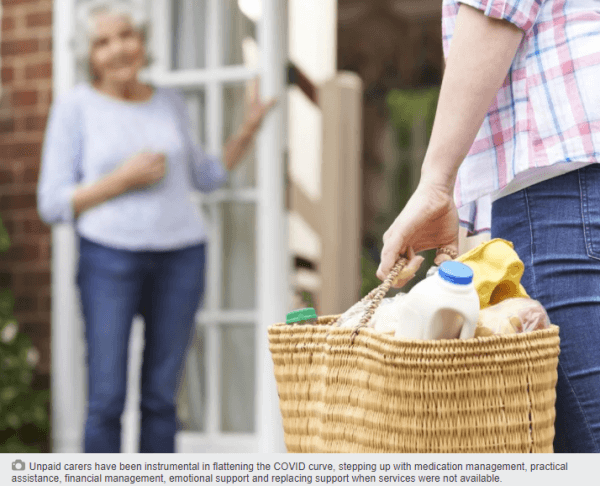 This higher ratio of carers in Tasmania reflects Tasmania as the most aged state, with some of the highest levels of chronic illness, and the highest autism rate in the country, among other factors.

A report by Deloitte Access Economics on The Value of Informal Care in 2020 estimated there are 2.8 million carers nationally providing 2.2 billion hours of care each year And 906,000 of these carers, provide more than 35 hours of care each and every week.

The replacement value of family carers in Tasmania is estimated at $2.2 billion (nationally this figure is $77.9 billion).

The Tasmanian Carer Policy notes that almost three-quarters of Tasmanian carers are female and almost the same number are aged over 65 years. Due to the demands of their caring role, unpaid carers in the workforce are less likely to earn the same as non-carers and have reduced hours of work and less career opportunities.

A particularly vulnerable group of carers are those under 25 years old, including in some cases children as young as five and six.

Young carers account for about 9 per cent of Tasmania’s 85,000 carers. Of these, it is estimated that one in 27 school students are carers. That’s one in every classroom.

During COVID, young carers have had to cope with home schooling, and with the increased demands of providing unpaid care within the family context.

Across the spectrum of ages and circumstances, without carers stepping up it would not have been possible for many vulnerable people to be protected.

Instead of becoming a COVID statistic, carers have ensured these family members are protected and supported.

One in six houses in your street has a carer.

Take a minute to reach out, say g’day, and thank them for their incredible efforts during this National Carers Week.